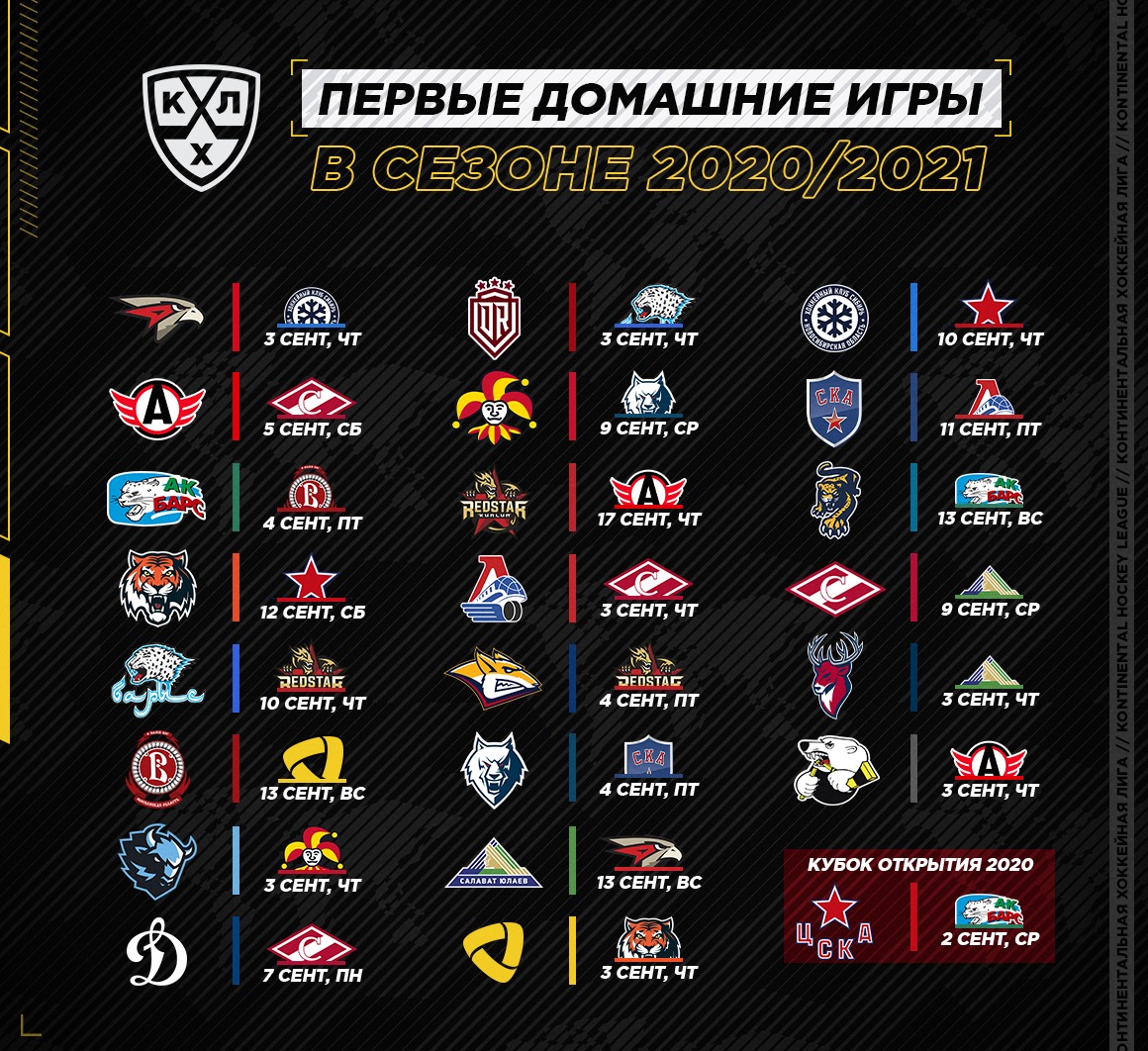 The championship starts on September 2, Wednesday, with a match between the first conference teams following the results of the 2019/2020 regular season-CSKA Moscow and AK Bars Kazan. The first stage will last until February 27, the number of game days is 142.

In accordance with the international calendar of the IIHF, the schedule of the KHL 2020/2021 championship provides for pauses for the stages of the Euro tour: from 2 to 9 November (in Finland), from 14 to 20 December (in Russia), from 8 to 15 February (in Sweden). There are also scheduled pauses during the KHL all-Star Game in Riga (January 22-24) and new year's holidays (December 31 – January 2).

The new composition of the divisions

Due to the change in the number of teams in order to reduce logistics costs, the League changed the composition of the divisions. Nizhny Novgorod " Torpedo» after a season back in the Eastern conference, Novosibirsk "Siberia" will play in the Chernyshev division. In the Western conference, Dinamo Riga and Moscow went to the Tarasov division instead of Sochi and Vityaz.

The start of the playoffs is scheduled for March 2, 2021, and the seventh game of the final series of the Gagarin Cup, if necessary, will be held on April 30.

For the convenience of fans, matches of both conferences are scheduled for the first and second stages of the Gagarin Cup. This will avoid simultaneous start of games, and fans will be able to follow all the matches of the game day online. All matches of the same playoff series will be played every other day.

The most important changes in the game rules:

Rule 31-face mask / protection and Capa, meaning all players must have their helmets covered and protected, and players under 18 must wear a helmet with a lattice mask attached to it.
Rules 49-puck in the game. The puck must be constantly in motion, in play. If one or both teams refuse to play the puck, the judges on the ice stop the match, and the next throw-in will be held at the point closest to where the match is stopped.
Rule 81 – position "outside the game" no. If a player on the defending team throws the puck out of the defense zone with a throw or pass, causing the puck to hit a teammate behind the blue line of the defense zone and bounce back into the defense zone while the attacking player is still inside that zone, the "offside" position is not fixed.